FULL DISCLOSURE: While Duff Johnson was an occasional consultant to Adobe Systems (among others), this review is objective.

NOTE: This review has been superseded by an expanded review of 5 PDF Readers

Cutting through the Bloatware Bloviation

Almost every review of PDF software (some examples are at Brush Technology, Make Use Of, and CNET Download.com) starts or ends with the complaint that Adobe’s Reader is bloated “for some unknown reason.” As such, it is claimed, a need for alternative “lightweight” free PDF viewing software was born.

“For those who still insist that applications can be measured by the time required for download or size of the installation, tell me how long does it take to deal with a PDF that breaks your preferred “lightweight” viewer?

Somehow, that metric never makes it into the lazy claims of ‘bloatware’.”

Bloat implies “unnecessary weight”. Adobe’s Reader weighs in at 182 MB installed because (a) it’s built to handle as many of the poorly constructed PDF files in the world as possible, and (b) it’s got lots of hidden functionality.

Why poorly-constructed PDFs exist at all is another question (we’ll talk about it some other time), but the fact remains: there are lots of malformed PDFs out there.

If you are counting installer or installed megabytes (who still does this?) there are definitely smaller competitors, but they can’t open all the bad PDFs that Adobe Reader can handle.

In the last five years, download size and disc space required has lost almost all significance when it comes to choosing software. If you can’t stand the wait for a 26 MB download vs 6 or 16 MB, I’m confident that you represent a vanishingly small proportion of real world users. We’re not talking about hundreds of megabytes here. Most users can manage a DSL connection or better as often as they need to install software.

Let’s agree to call something “bloated” if we know there’s no reason for the size and/or if the size creates a problem. Otherwise, let’s get back to performance, which is far, far more interesting than megabytes.

Is my software properly caffeinated?

The second common complaint is that Adobe Reader is “slow”. A while ago, we performed a casual comparison of Adobe Reader with Preview in Mac OS X, and determined that in at least that one specific instance, Reader was a little faster.

Now we’re back to look at PDF Readers for Windows, and this time, we’re looking for more information.

I chose 3 free PDF desktop viewers for Windows in addition to Adobe’s Reader for this review. All tests were performed under Windows XP (itself running under VMware, if you must know).

Rather than focus on marquee features or each company’s claims, I chose to evaluate real-world performance in key government and business functions to see whether or not these applications were ready for prime-time.

If you claim to be an “Adobe Reader replacement”, you better be ready to play in Adobe Reader’s league, which means far more than the ability to display and print PDF files.  Everyone recognizes this, which is why all these free Readers are larded up with additional, non-Reader features.

Specifics about the tests conducted are provided below the table.

Many (if not most) PDF files posted to websites are linearized – what Adobe calls “Fast Web View”.  You can (and should) linearize your own PDFs before posting (in Acrobat, it’s a “Save As”).  To check a PDF to see if it’s linearized, look in the “Description” tab in the file’s Properties (File -> Properties menu, or Control-D).

When a linearized PDF file is downloaded from a server that supports the technology (the vast majority), the result is a file that displays onscreen as soon as the first page has arrived while the rest of the file continues to download in the background.

Applications that support linearized PDF can therefore display large (even massive) PDF files far faster than applications which force the user to download the entire file prior to displaying it.  Here’s a linearized PDF you can try in your browser.

We attempted to open this PDF file (the US Budget for 2011, 7.7 MB), then noted the differences in behavior between each viewer.

“All Functions” means that the viewer displayed the Certificate noting its status and provided a means to validate the certificate.

“Status Only” means that the viewer, although aware that the PDF was certified, offered no means of validating the certificate.

“Error” means that the viewer behaved in an invalid manner.  In this case, the viewer incorrectly stated that a valid certificate was invalid. 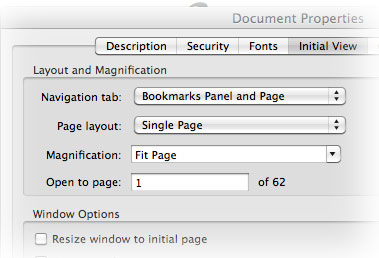 Not all viewers respect the Open Options settings in PDF files with respect to the display of bookmarks, thumbnails and other open-file options.

A PDF viewer must be able to display bookmarks or thumbnails as the document’s author intended. These are vital usability features for longer documents, and other file option options (zoom level, for example) are important as well.

Only Bookmarks and Thumbnails open options were tested for this review.

Thetest file is a simple PDF that includes one example of each type of standard PDF annotation.

While there are many powerful annotation features in Acrobat and Adobe Reader, a PDF viewer, minimally, must be able to properly display standard annotations added by other software.

* – The Nuance Reader failed to correctly and consistently display the annotations and their corresponding notes. The Foxit viewer had a different variety of problems.

The same 1018 page file (a version of the US House’s Health Care Reform legislation) was used for the speed tests.

The “giant file” used for the “open giant file” test was a 306.7 MB, 1,010 page PDF. For obvious reasons, I’m NOT posting it – you’ll just have to trust me. Each application was started before the file was loaded.

We attempted to open a few of our customer’s forms with each viewer and noted the results.

In addition, a fairly simple XFA form was tested. No function was expected on this form using the non-Adobe viewers, however, the Nuance Reader proved somewhat more capable than the other 3rd party viewers of at least attempting to manipulate the form fields (even if the result wasn’t actually usable).

** – Foxit failed the “simple” and “complex” tests because the application displayed check-boxes and other form-fields incorrectly (it filled checkboxes with solid color instead of a check-mark, for example).

The archive subset of PDF is ISO 19005, better known as PDF/A, is the standard for long-term preservation of electronic documents.

Published in 2005, PDF/A is now being adopted by governments, courts and businesses around the world.

PDF/A includes “conforming viewer” requirements. In this review, however, only one viewer appeared to notice when a PDF/A file was opened. Here’s a good explanation of what it means to be a conforming PDF/A viewer.

You read the review, you be the judge. Does size really matter?